Days ago, our community brought forth the first leverage trading aggregator protocol MUX V2, conceived in the conviction of decentralization and dedicated to the proposition that MUX protocol is supercharged for traders.

To benefit the whole community, we propose to amend the income distribution, giving more allocation to the veMUX holders.

Currently, the protocol income is distributed as follows:

A significant portion (30%) of the income is currently allocated to the POL. However, it is still an early age of MUX protocol, and the average trading volume is not high enough. As a result, the POL has been growing slowly since its launch. Therefore, the POL cannot grow to a significant portion of the pool liquidity in a short period. Hence, the effectiveness of such 30% income is relatively low. We can change this by allocating more income to veMUX holders, boosting the veMUX staking APY. As a result, the MUX community will benefit from the increase of the APY. And the community will attract and onboard more and more users.

The amended distribution shall be:

I agree with this! At the same time, having more PoL does improve the balance sheet of MUX. It would be nice in the future of the earnings from PoL MUX can be distributed back to veMUX holders as well.

Giving more allocation to veMUX holders might help for the tokenomics model but i am not sure Mux needs that.

The problem u mentioned is mostly about liquidity. Mux needs to attract more liquidity so maybe it’s better to redirect those rewards to muxlp stakers? 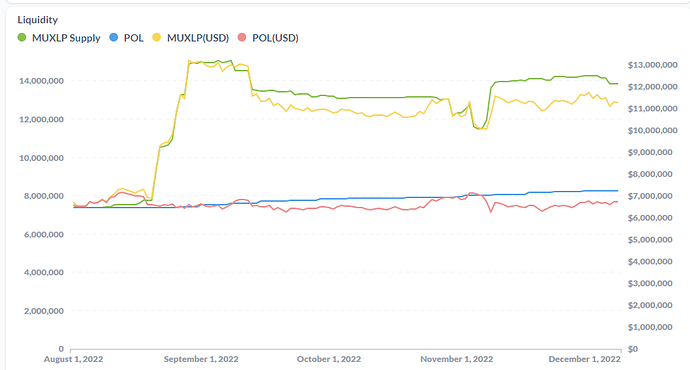 %50 of liquidity is already POR which means %35 of protocol incomes goes to the vemux holders already.

Which one we would like to incentivise? Muxlp stakers or vemux holders?

Wouldn’t that in the long run decrease the payout for veMUX holders?

Yeah allocating more income to LP will be a good direction as deeper liquidity will be beneficial for the native MUXLP pool.

how does everyone think about this?

We can make adjustment along the way based on protocol statuses. If we start to have stable high trading volume on a daily basis, as well as a deeper native pool, then we can propose to allocate more income back to POL.

The current issue is that the average trading volume is not high enough. As a result, the POL has been growing slowly since its launch. Therefore, the POL cannot grow to a significant portion of the pool liquidity in a short period. Hence, the effectiveness of such 30% income is relatively low. We can change this by allocating more income to veMUX holders and MUXLP stakers.

First off, i’m glad we are implementing community voting

Regarding the proposal, I fully agree with it. This will ensure that veMUX holders can capture the protocol’s growth over the next few years.

We can circle back to a better system for POL in the future.

This might be a better way. It would be much better if we can make some projections about those suggestions. At the and we should try to attract more volume from other protocols and this should be the priority.

Btw, is leveraged trading aggregator generating any revenue for mux? is there any fee u re taking from traders?

I’m preciated too. @dumbird_MUX has been posting those proposals but there is not much attention from community members. We should create more strong community. Mux has a great potential.

I agree with the adjustment. This allocation give more income to the LP, which will defintely help onboard new LPs. In terms of the veMUX holder reward, for the POL takes about 50% of the liquidity pool, the veMUX holder will gain half of the additional 10% allocation, which is 5% of the total income, making the final allocation 15%+5% = 20%. Comparing to the orignal proposal, in which 25% is allocated to the veMUX holders, it is quite similar.

i agree with “Total Protocol Income × 25%: Allocate for veMUX holders (in ETH)”.
i don’t agree with the adjustment, there are 2 reasons:
1.Since the launch of MUX, the revenue of MUXLP has been higher than that of GLP, which is competitive. Therefore, for MUX, the issue of LP insufficiency is not caused by the low revenue of MUXLP. We don’t need to raise the revenue of MUXLP, as long as GLP holders are aware of this, they should transfer the liquidity to MUX.
2. POL belongs to MUX, or veMUX holders. It would be a LOSS for veMUX holders to allocate part of POL’s earnings to MUXLP. Considering veMUX’s long-term lock-in mechanism, in order to obtain the project’s dividends, It is practically mandatory to lock up for very long term (over 4 years), so veMUX holders are fully committed to the project, so we shouldn’t make changes that could easily affect their interests.

I still believe it’s better to direct those fees to MuxLP stakers.
Mux or veMux holders are great ok, but i don’t think they re the source of Mux’s LP. Perpetual trading needs deep liquidity and i believe we should encourage to add liquidty more than Mux staking. I see just one gud point to increase vemux apr which is expanding our community to more users. It may attract more degens to buy and farm mux on the platform and would help to advertising MUX protocol but i’m not sure how much help would that be.

Whatever we have needs to keep the “x POR” and “x (1 - POR)” formulas.
The POL is LP, and should be paid as LP. We shouldn’t be giving mercenary liquidity a better return on their MUXLP than the protocol earns on its own MUXLP. They should be the same.

If we do want to increase payouts to MUXLP holders, we should allocate a larger slice of the pie to liquidity providers, whether it is protocol owned or external. The “x POR” and “x (1 - POR)” component can sort out the split.

TBH, I think that the current payout schedule is actually pretty good. It allocates 70% to liquidity (POR and mercenary, split based upon weight), and 30% to stakers.
Bumping the 70% to 80% or something like that won’t really make much of a difference in terms of APY, but it might help. I don’t believe that we should be giving away our POL’s rewards to mercenary LP. Our POL is putting in work and earning it in the same way they are (though higher quality because ours won’t be pulled).

I don’t feel like we need to add additional incentives to veMUX. Payout is already fair. Juicing the token price doesn’t really benefit anybody in the long run.

Of the rewards going to protocol, 30% goes to buying MUXLP to build POR, 70% is paid in ETH to veMUX stakers.

Could maybe swap the 30/70 split to a 20/80 split if folks felt strongly, but it already feels fair.

I don’t think there’s shame in the POR being built up slowly over time. It’s an asset that will continue to produce for us long into the future.

This also assumes that whatever fee we charge is based upon the usage of our liquidity pool.
As the focus is shifting towards perp multiplexing, if we charge any fees while the underlying trade’s liquidity is sourced from elsewhere (ie, GMX), then I think all of our fee should go to stakers. In that case our own liquidity added no value. Of course, boosting does use our liquidity pool, so I think that fits squarely into our traditional fee structure,

I have asked this because i thought a bit like that. However i still believe liquidity is important. People not gonna trade on mux if there is no liquidity nor enough. And i believe taking a cut from traders is wont generate that much of yield if they trade on muxlp. We simply don’t get traders loses in that situation. Just fees.

Another downside of taking much fees from traders who use perp aggregator might disincinivise them to use mux perp aggregator. They can simply go and open a trade on gmx.

Btw, is leveraged trading aggregator generating any revenue for mux? is there any fee u re taking from traders?

The boost fees definitely add up to the overall trading cost. However, since the boosting can lower the maintenance margin rate and offer better liquidation price for GMX positions, it provides value for traders.